Can the Market Bounce if Junk Bonds Sell Off?

The small-cap index Russell 2000 (IWM) looks hopeful for a Wednesday bounce, while the High-Yield Corporate Debt ETF (JNK) sends another warning sign. Though we are watching all major indices, IWM is the most interesting since it found intraday support near its 50-day moving average at $228.06. It should be noted that none of the other major indices are as close to a major moving average as IWM.

On the other hand, High Yield Corporate Debt (JNK) has recently broken main support at $108.06. This shows that investors’ appetite for risk has waned, as JNK tends to move higher in a bullish environment. Therefore, if IWM is going to turn around, we should also watch for JNK to do the same. Nonetheless, if IWM pushes higher while JNK continues to break down, a bounce could be short-lived.

However, with a potential bounce setting up, let’s look at the strongest members of Mish’s Economic Modern Family for trade ideas. Currently, Transportation (IYT) and the Regional Banking sector (KRE) are the top performers of this week. 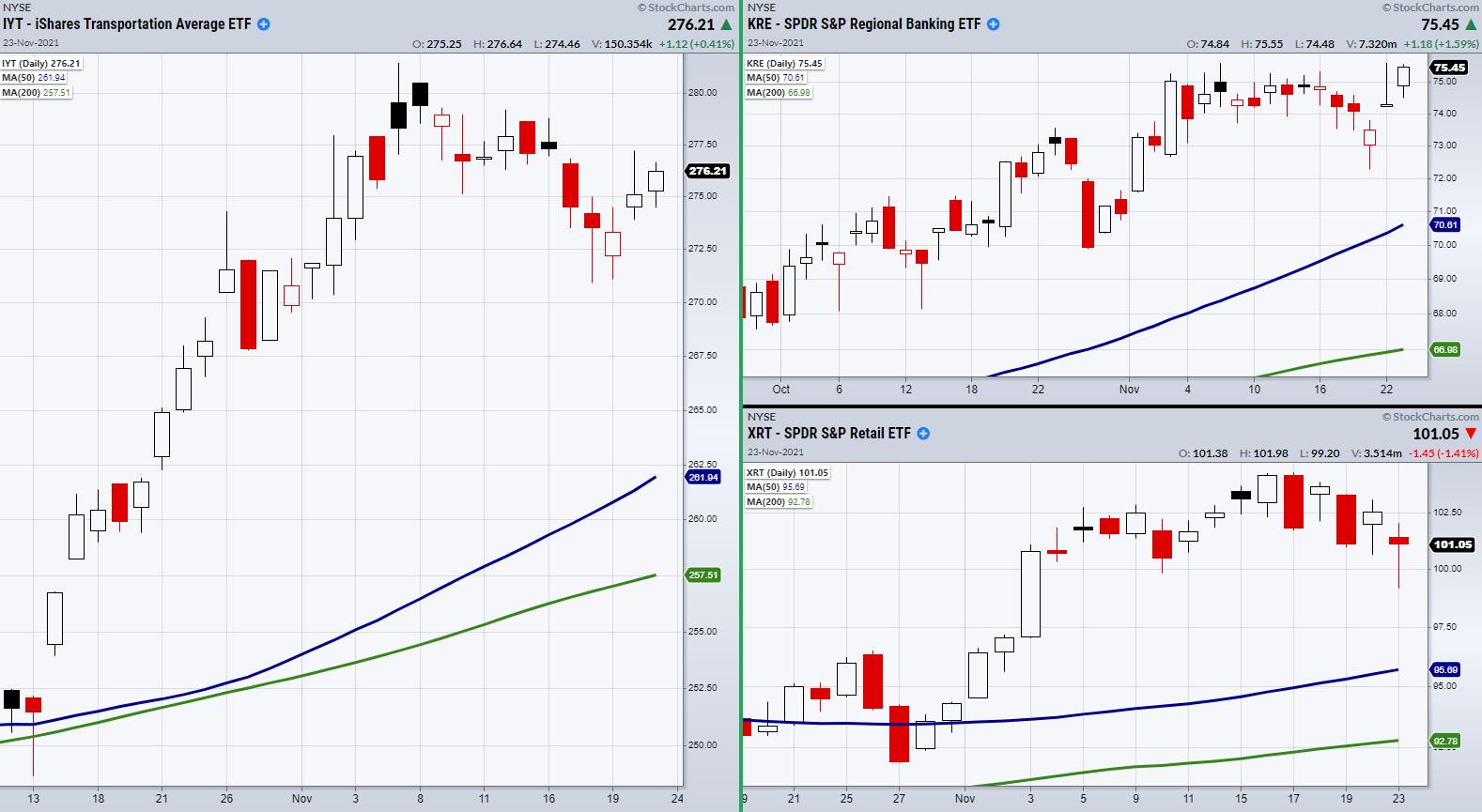 As seen in the above charts, KRE, along with IYT, was able to close over the prior day’s low, showing extra strength compared to IWM, which closed almost flat on the day at -0.26%

With that said, for Wednesday, watch for KRE to clear resistance at $75.59 and for IYT to stay over its 10-DMA at $275.83. These will be pivotal levels for each to clear or stay over.

One last sector to watch is Retail (XRT). If transportation can head higher, watch for XRT to follow, as both at times can trend together.

Is it back to work or work from home? On the Monday, November 22 edition of Your Daily Five, Mish discusses the best way to look at this is the market in terms of price. You’ll be surprised to see what she looks at, because it’s going to show the opposite of what we hear the media talk about.

Watch Mish dive into the energy and oil sector on Bloomberg!

About the author:
Mish Schneider serves as Director of Trading Education at MarketGauge.com. For nearly 20 years, MarketGauge.com has provided financial information and education to thousands of individuals, as well as to large financial institutions and publications such as Barron’s, Fidelity, ILX Systems, Thomson Reuters and Bank of America. In 2017, MarketWatch, owned by Dow Jones, named Mish one of the top 50 financial people to follow on Twitter. In 2018, Mish was the winner of the Top Stock Pick of the year for RealVision.

Subscribe to Mish’s Market Minute to be notified whenever a new post is added to this blog!

In Cultivating Cannabinoids, Environment is Everything